* Applies to deliveries within Germany, please refer to the shipping information button for delivery times for other countries shipping

This authentic New Zealand Manuka honey, harvested from a single highly secret block has been independently certified by the boffins at Analytica to be an unprecedented 1,700+ MGO. That’s a whopping UMF 31+ – the highest level the UMFHA have on record so far.

Each jar of this precious, highly collectible 2017 Rare Harvest is luxuriously topped with a hand-turned New Zealand native timber lid, the wood also incorporated into a bespoke, brass handled honey drizzler. Its white, magnetically closed outer box opens into five segments, reflecting the petals of the Manuka blossom – which, in spring and summer blankets the remote New Zealand countryside in soft white.

But as true luxury Manuka honey aficionados know, it’s what on the inside that counts. Something UMF Honey Association spokesperson John Rawcliffe was rather impressed by. “The UMFHA can confirm that the Manuka Honey sample submitted by its member The True Honey Co. – has generated the highest ever recorded UMF test result since our accredited laboratories first began testing samples.”

Just as an oyster overcomes grit by creating a precious pearl, the challenging weather conditions of the 2017 season drove one single windswept, remote Manuka block to produce a particularly potent nectar. This resulted in an extraordinary, singular harvest – so special that we decided to release the honey as a very special limited edition of just 1000 authenticated, hand-numbered jars, signed by our founder Jim McMillan.

This kind of result may be due to an extraordinary set of natural circumstances, but as The True Honey Co. founder Jim McMillan says, it’s not something to leave simply to chance. “We stand behind every drop of our honey and this can only be achieved by having full ownership and control from hive to jar. The genuine care of our honeybees is paramount to us, because healthy bees make exceptional honey.”

Rare Harvest: a pure natural food as uncommon and luxurious as white truffles or Beluga caviar. Now is your chance to own the world’s highest rated Manuka honey. Independently certified at 1,700+ MGO, 31 UMF, Rare Harvest is limited to 1000 luxuriously presented, collectible jars. Crafted from a single unique site, we believe it’s the highest MGO and UMF rated Manuka honey available in the world. And this remarkable miracle of nature may never happen again.

There can only be one
“The UMFHA can confirm that the Manuka honey sample submitted by its member The True Honey Co. – has generated the highest ever recorded UMF test result since our accredited laboratories first began testing samples.”
UMF Honey Association spokesperson John Rawcliffe.

Be one of the first
Only 1000 people will be able to possess a jar of 2017 Rare Harvest. Crafted from a single unique site, this is the highest MGO/UMF rated Manuka honey available in the world.

The True Honey Co. is committed to meeting the highest export regulations including MPI, AsureQuality and the UMFHA guidelines. This Manuka honey has been tested by an independent laboratory for quality and purity, and certified by the UMF Honey Association (licence number: 2900). AsureQuality has audited every step of its journey from bee to you – ensuring it is safe, ethically made and good to eat. And every jar carries the FernMark – your guarantee that it was produced, harvested and bottled in New Zealand. (licence No.100086).

Not suitable for infants under 12 months of age.

Every batch is independently tested for its methylglyoxal levels.

Store at room temperature, around 20°C in a cool, dark place, with the lid properly closed. No need to keep it in the fridge except in very hot or humid climates.

Not suitable for infants under 12 months of age. 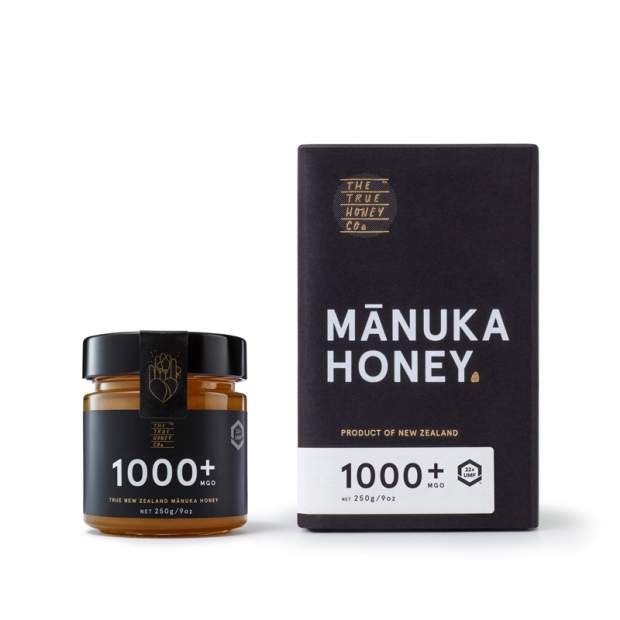 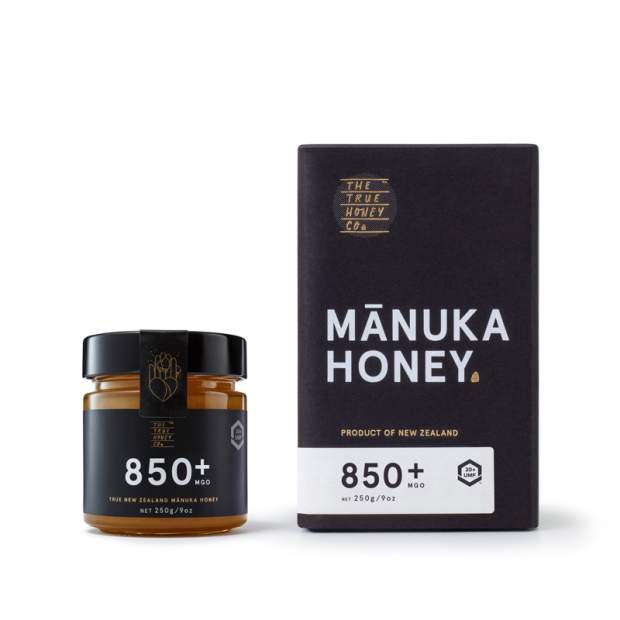